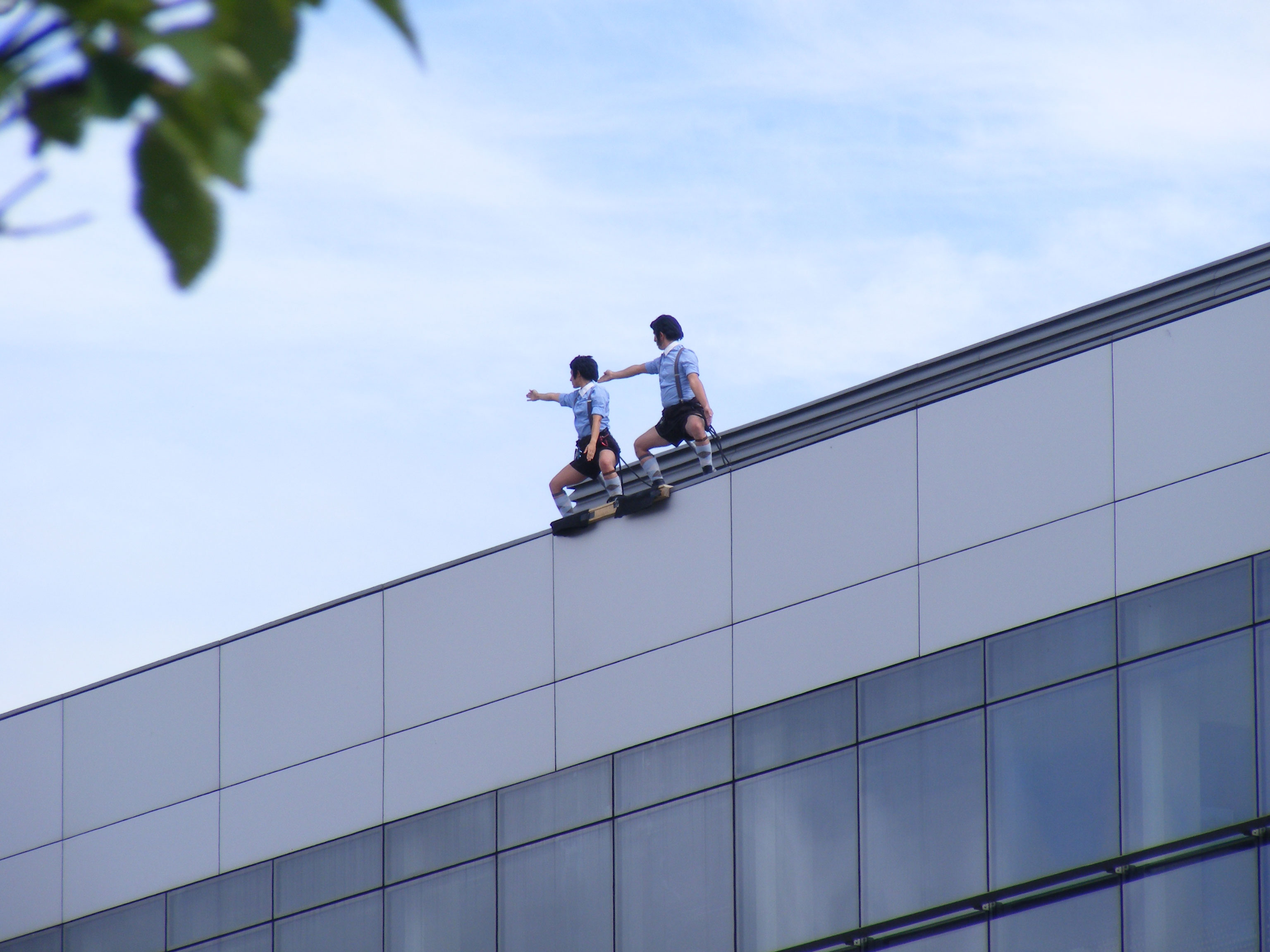 I’ve lived in Waterford for nearly five years now, but up until last weekend, I had never experienced the Spraoi Festival.  I had heard lots about it and had been intrigued, but I must admit, I’m not a big crowd person and I’m a bit of a wuss when it comes to outdoor events plus torrential downpours.  But this year, I took a good look at the Spraoi programme (and the weather forecast), determined to find a suitable event to attend.  I found Delreves.

Delreves are a Spanish dance company, specialising in vertical work, which means performing a dance routine down the front or side of a building.  The Menapia building, on the Mall, was the stage of choice for a routine inspired by Alice in Wonderland, called ‘Repite Conmigo’.  We arrived a little later than the advertised start time of 2 pm, only to be met by a distinct lack of building related dance activity.  A modest crowd had gathered across the road from the Bishop’s Palace (where I delivered my poetry reading last March).

Hubs and I strolled over to find a man and a woman diving, tumbling and leaping across a dance mat.  One moment they were reaching for one another, with anguished grab-like motions, the next, they drew apart and glowered in opposite directions.  It was more of a fight than a seduction. The whole thing was incredibly intense, ending with the man on the woman’s shoulders, curled up into a foetal position.  There was no set down in front of the audience.  Instead, the dismount took place, out of sight.  I felt this worked well, underlining her strength and ultimate victory.

Moments later, the crowd shifted and began a new gathering in front of two eccentric looking characters, performing a mime.  The theme of the piece seemed to be ‘Opening’ as a flag was unfolded to reveal the words ‘opening night’.  This was accompanied by much sprinkling of glitter and exaggerated grins.  A red ribbon and a pair of shears were the next set of props and a woman was ushered in from the audience to take part in the action.  As she struggled to operate the shears, hubs and I sensed that it was going to be a while before Delreves made an appearance.

We wandered down the street, passing a tyrannosaurus rex on the way.  He was reassuringly still, so I felt it safe to take this picture.

We headed down to the quay, where a band could be heard warming up.  There was a mixture of percussion and brass, with two singers, one male, one female.  A blast of sound gave us a feel for their bold and quirky style.  One onlooker showed his appreciation through fling-around dance moves.  We didn’t linger though, as we were keen to catch Delreves in all their sweeping, dizzy heights glory.  We weren’t disappointed.

As we returned to the mall, the dancers were poised at the top of the building.  Even this preliminary pose looked like art and we could clearly see the black bobbed wigs of the two Alices.

Next came the descent.  Once in position they continued to mirror one another, with expansive arm movements.  The picture below, shows them ‘running’.

The most dramatic moments were swing out arcs, out and away from the building.  The image below, depicts the combined shape of the dancers and has also captured their shadow, adding another layer to the echo theme of the piece.

The accompanying music contributed greatly to the overall drama.  It was heavy and emphatic, lending each move significance.  As the dancers disengaged and climbed down the building, side by side, the audience were left feeling that they had witnessed something unique.  I know I felt that way!

You can check out video examples of Delreves on Youtube.  But this kind of dancing does work best when experienced live.  And if it had rained?  Well, I would have stood there, under my brolly and soaked up the magic.  It was that special.