As February hovers on the horizon, I’m seeing out January with a few treats to counter the wind, rain and wintry showers.  Yesterday I gave myself a day off.  Hubs needed to source some materials for his 3D Printing Business, so I tagged along on a day trip to Cork.  They say ‘It’s the journey, not the destination’ and I certainly enjoyed the drive up.  It was just good to get out and see something different. 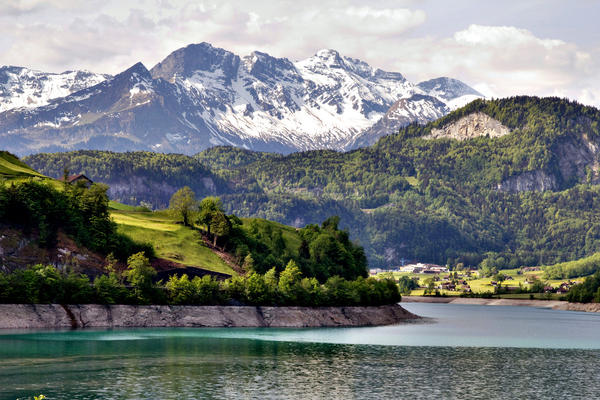 With all the sunshine and the glitter of faraway snow on the mountains – my journey to Cork offered a similar vision to this!Artur Staszewski / Foter / CC BY-SA

The snowy mountains were particularly arresting – a vast kind of white, speckled through with darker patches, like craters on the moon.  We could almost feel the icy cool drift of their breath, even as we turned up the heater in the car and marvelled at the clarity of the sky.  Too many mornings have been filled with pale, lifeless skies that never seem to wake up, but out on our journey, we blinked our eyes at the sun and breathed freely.  This was new, this was spring-like, and even the occasional shower couldn’t wash that feeling away.

One of my favourite landmarks on the way from Waterford to Cork, is the ‘Swan Lake’, near Castlemartyr.  My husband introduced me to it on one of my first visits to Ireland.  I remember thinking how magical it was – the water, crowded with elegance, white feathers, sloped beaks and a group glide that was nothing less than enchanting.  We didn’t have time to stop on this occasion, but my eyes took in the calm water and a few swans, easing around the edge – perhaps seeking shelter on a cold day.

On arrival in Cork, we headed to Mahon Point, in search of a mid-morning snack.  We thought about coffee and cake but opted for KFC Krushems – one Orio  and one Milky Bar.  We were nearly put off by the calorie count, but decided ‘Weary Traveller Syndrome’ made it ok.  We window shopped and people watched whilst slurping from our chocolately drinks, like a pair of kids.  A few mums wrestled with toddlers as we scanned the cinema listings out of curiosity.  Many of the Oscar nominated films are on show at the moment.  I wouldn’t mind seeing ‘American Hustle’.

We moved on.  Hubs picked up the metal he needed, we grabbed a quick lunch and went on to have a browse around a few more shops.  I’ve already picked up some items of clothing in the January sales, so limited myself to ‘just looking’.  However, the newsagents were offering a 2 for 5 deal on many of the books, so Hubs and I both chose one – ‘Papillon’ for him and ‘Left Neglected’ for me.

Having read ‘The Nightwatch’ and ‘Life of Pi’ recently, I was looking for a lighter read that would still be captivating and well written.  ‘Left Neglected’ certainly offers that.  It deals with family issues, ‘having it all’ and a disaster that changes the heroine’s perspective in more ways than one.  You’ll have to read it to find out what I mean!

I’ve been back at my desk for the last few days, but I’m looking forward to the weekend and the first game of this year’s Six Nations Rugby Championship.  Wales face Italy on Saturday, so it will be my duty to cheer on the boys in red, as it has been since I was first introduced to the game and this particular championship, at a very young age.  It might even be time to air out the old red jersey!