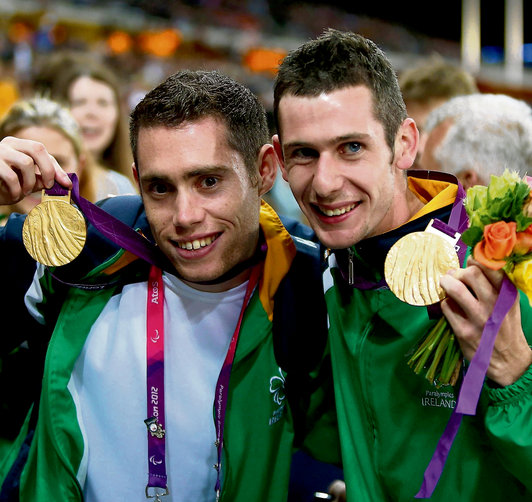 The 2012 Paralympic Games have been the most dramatic and inspiring ever.  Team Ireland has excelled with wins from fastest Paralympian ever: Jason Smyth and enduring distance runner Michael McKillop.  Their success left me wondering why I had never heard of them before.  Admittedly I’m Welsh and have only lived in Ireland for three and a half years but my patriotic husband hadn’t heard of them either.  I can only conclude that Ireland has not been promoting or celebrating these athletes enough and hope that the Paralympics will serve to raise their profiles so that they can be supported in future sporting triumphs.

The London 2012 Paralympics has not been short on drama either. Wheelchair racer David Weir won some very vocal supporters, not afraid to let rip with blood curdling howls in tribute to their hero ‘The Weir Wolf’.  Sweating it out under Werewolf masks, they proved their devotion in a very bold and hairy visual display.  The ‘Twilight’ saga has a lot to answer for!

Meanwhile Paralympic superstar Oscar Pistorious courted controversy by claiming the blades of his rival Alan Olivera were excessively long, giving him an unfair advantage.  Olivera dramatically out sprinted Pistorious in the 200m leading to a shock defeat and some bitter comments.  As a Pistorious fan myself I was surprised and a little dismayed at his remarks. If there was anything unfair going on, then was not the time to talk about it.  However, a top class athlete only ever used to victory at the Paralympics had just been beaten.  Perhaps Channel 4 should have given him some breathing space before brandishing the microphone.

An apology from Pistorious followed and the outburst certainly did not curb his winning spirit as he went on to contribute to South Africa’s Gold in the relay and most satisfyingly triumphed in the 400m.  What a climax for the South African Superstar and what pain for Alan Olivera as he hit the ground, clutching his leg.  However, the Brazilian athlete will surely go away, train harder and be on dazzling form for his home games in Rio.  Whether old stager Pistorious will feature there remains to be seen.

London 2012 has emphatically showcased Paralympic sport, earning the awe and respect of the watching world and I am looking forward to following many of the athletes in the future.  In particular, I will be watching out for this new breed of Irish sports star that isn’t afraid to take a risk, work hard and fulfil their potential. Jason Smyth, Michael McKillop, we salute you!