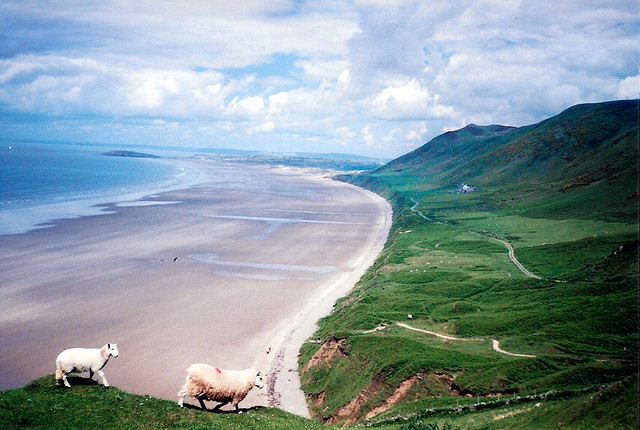 The Wind that Shook the Daffodils: A Memory Story by

The St David’s Day concert was one of the highlights of the Primary School Year. We got to wear our Welsh costumes. For the girls, an elaborate ensemble comprising of a white blouse, shawl and red skirt, topped off with a lace trimmed black bonnet. For the boys, a leek. Yes, just that, a vegetable, pinned to a shirt, worn with smart trousers, and proudly worn, I might add. We Welsh have some strange yet wonderful traditions.

We also got to sing our little hearts out on St David’s Day morning with each class staging a performance. In my second year of Primary School, we had an imaginative teacher who liked to do something a bit different when it came to a special occasion. This particular year she told three of the girls in my class that they were to be daffodils. My inner dialogue went something like this:

Moments later, my teacher announced that I was to be . . . the wind.
Even, at six years old, I sensed this to be a less than glamorous role. But I couldn’t complain. I was part of the main action while the rest of the class had to content themselves with sitting in the background and singing. At least I would up there, strutting my stuff, being especially breezy.

Throughout the day, my new role grew more attractive as I came up with costume ideas. I had a white leotard and tights from ballet class at home. I could wear those but I needed something more . . . a cape. After school, I shared ideas with my Mum and she completely embraced the project, taking me shopping for white crepe paper. She then put a cape together with that particular brand of magic only Mums can conjur up. And there I was, an icy wind, intent on destruction. Well, intent on shaking up a few daffodils anyway.

When the day came I was so excited. Buoyed by the rousing sing-song, provided by my peers, I swept in, swirling my cape, huffing and puffing to full capacity. Accompanied by a rush of adrenalin and the knowledge that my parents were proudly watching, I was exhilarated. And after all that, the best was yet to come.

In those days, we got the afternoon off for St David’s Day. So, having changed back into my Welsh costume, I was collected by my Mum and we set off for the beach, stopping to pick up my cousin Mathew on the way. I’m not quite sure why a seaside location was chosen. Wales is not known for its balmy shores in the month of March, but somehow it worked. Although I remember a freshening breeze, I also recall sunshine and the keen scent of the sea, salty and invigorating.

Back then, we were always running, with the sheer abandon only children experience. The afternoon felt long and bright, filled with possibilities. Mum had brought a bucket and spade for each of us and we happily built sandcastles, feeling as far away from school as if we were in a foreign land. And in some ways, we were, caught up in a world that only existed for those few precious hours.

Next, came the hunt for pebbles and shells. It’s curious how these items wink and glisten in their natural habitat, yet, when examined at home they often appear dull. I suppose they are missing that special combination of sea and sunlight. Of course, as a child, that didn’t cross my mind as I greedily gathered treasures, filling my bucket right up to the top. I was determined to pick the best of everything and to win the unofficial competition between myself and my cousin.

Eventually, our buckets began to weigh us down and we left them with my Mum so we could explore further. Rockpools always fascinated us and the creature to look out for was the crab. For some reason, he scored more points in our childhood game, although I was more interested in the majestic looking starfish. To me, their textured outer layer resembled jewels and I wondered if they had fallen from the sky. They were proof that magic existed.

The afternoon peaked with an ice cream and a race along the water’s edge. We jumped and skipped, shrieking with delight as we got splashed and nobody told us off. I don’t remember being cold, or thinking about tomorrow but the day was drawing to a close and it was time to drop my cousin back home and return for our tea.

A year or two later, the traditional half day off school was stopped. Little did we know just how precious that sunny afternoon at the seaside was. That’s why I love the fact that St Patrick’s Day is an Irish holiday and is celebrated through parades, traditional music, singing, dancing and making merry. I just hope the Welsh will be able to mark St David’s Day in similar fashion, at some point in the near future. It will mean that children become passionate about their nationality at an early age and will be left with powerful memories, like mine.