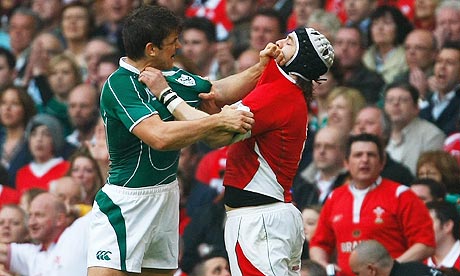 A friendly tussle between the nations . . .

Last weekend was tricky.  It was a rugby weekend which was a positive.  My husband and I both love rugby so it was a time to be united you might say . . . except that we were cheering for different sides.  Yep, it was Wales v Ireland i.e. Me v Hubs, never a good recipe.  It basically means we can’t go to the pub to watch the match because the last time we did some idiot wearing a huge leprechaun style hat jumped in front of me waved his arms and grinned manically every time Ireland scored.  Granted, I was wearing my Welsh jersey which may have inflamed his national pride but still, I think I was entitled to watch the game in peace whichever side I was supporting.

So anyway, our match viewing is restricted to a strained atmosphere on our two seater sofa.  Any cheering must be muted, sitting bolt upright and craning forward has to be done discreetly and with as little enthusiasm as possible.  But even if we are tiptoeingly careful disputes are bound to flare.  Before the game even started the thorny issue of Sam Warburton’s sending off at the World Cup reared its ugly head.  I say it should have been a yellow card in keeping with all the other decisions made at the World Cup.  Hubs says it should have been a red.  We are never going to agree on it.  Matters were not helped when Bradley Davies executed a worse version of the spear tackle on Ireland’s Donnacha Ryan.  This time when Hubs shouted ‘red’ I didn’t argue. Talk about anticlimax when Leigh Halfpenny’s boot sealed the win for Wales.  I couldn’t even celebrate.  Why does every Wales / Ireland clash have to be so controversial.  Don’t they care about my marriage??

In other news I recently read a story to my class of pre-schoolers, an activity I had thought I would enjoy as a major fan of books.  Firstly, it’s unbelievable just how crowded you can feel by a group of little people, secondly who knew how short their attention spans are?  I think I held them for about five seconds, then fidgeting set in, chatter began to build and finally at least half of them turned their backs on me to look at a group of children heading for the swings outside.  Well, my ego was severely dented, I felt like hurling myself into the nearest corner to sulk.  Unfortunately the space was already taken by the naughty kid on ‘time out’.  The only option left was to close the book smartly and make an ‘I don’t care’ face. I’m so suited to childcare 😉

On the writing front my e book is still poised for flight.  I’m blaming last week’s cold and consequent throat infection for the delay.  I’m also in the middle of character sketching and plotting for my latest book.  And if you’re scratching your head trying to think of an alternative to chocs and flowers for Valentines Day why not check out my short story ‘Teachers in Love’? http://bit.ly/sGs7Zq It’s lighthearted, romantic and full of life lessons. ‘Love doesn’t have to be hard work!’