The road narrows and the fog hangs in, like dragon breath. We’re on a nameless diversion – no signposts, not even sun to mark the horizon.  Houses float out, make themselves known against white.  If people live here, it can’t be so desolate.  It’s just the weather.

But the road shudders its way into the car, into our bodies, until we exclaim at its roughness. Our eyes find the dirt, not even a hint of a white line.  We could not live here.

A St Bernard looms out of the drifting atmosphere.  He’s still and doesn’t make a sound, as if he’s guarding against something he can’t quite sense.  I think of Stephen King and ‘Kujo’.  I’ve never been brave enough to read the book but still fear its lurking concept – the rescue dog turned evil. 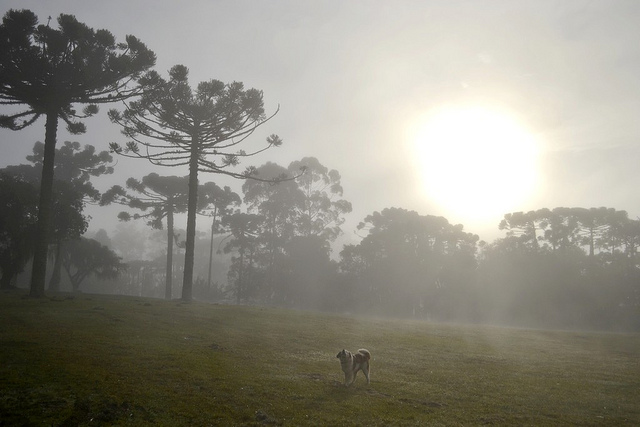 The car moves on and the road splits, forcing an ill-informed decision.  We go left, find a new destination, blink it into focus.  We’re facing a castle; small and white, with neat turrets.  It’s the kind of building that should be ruined, crumbled in on itself.  Instead, it stands defiant, polished by the moon.

We get out of the car, drawn in by the fierce luminosity of the place.  It’s in our eyes and on our skin.  We move closer.  The door is open, dark and gaping.  The stone feels alien under our feet, as if it has a cold life of its own.  I expect our footsteps and voices to echo.  Instead we experience a curious, deadening effect, as if we have been switched off.

“Welcome!”  A face, in candlelight, seems to hover and beam, like that of the Cheshire Cat in ‘Alice in Wonderland’.  A few steps forward and I realise it’s just an effect, caused by his dark clothes and the playful nature of the light.

“You’re just in time. I was about to light the fire.”

I hope you enjoyed this Halloween Short Story extract.  It’s always fun to post a bit of fiction around Halloween and use the occasion as inspiration.  I don’t have a plan for the day itself, although I have bought one of those witch’s hat headbands, in a rather fetching shade of purple.  I toyed with the idea of dressing up my bump as a pumpkin and heading off to a party somewhere, but I think I will probably end up staying home and cosy!

My husband and I do have plans for the rest of the weekend, as it’s my birthday on Sunday.  I have a new dress to wear, and dinner and day trips have been mentioned, so I’d better conserve my energy for the treats ahead.

Figure of Night – Poetry for Halloween